12th International Conference on Education, Research and Innovation (ICERI 2022) covers topics such as:

12th International Conference on Education, Research and Innovation (ICERI 2022) will be held in Hangzhou on 16-18 September 2022.

Other Events with Similar Categories

Other Events with Similar Location or Organizer 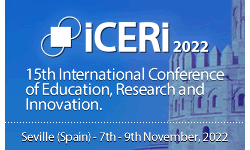 The teacher training process in use of Information Technology and Communication through virtual environments
Article content. Press on the above link to close

Trends in teacher training in the use and appropriation of information technology and communication for the development of mediation for learning, teaching, communication, mentoring, collaboration, including through virtual learning environments, by different higher education institutions in the region of the coffee in Colombia, based on the standards of the Ministry of National education of Colombia established teacher training route for the use and appropriation of information technologies and communication in professional development teacher, taking into account the institutional needs and national trends integrate ICT in education, in the process of training provide the foundation and skills to design mediations that enable autonomous learning, teaching and learning in education distance and virtual educational use of Web 2.0 resources, the creation and tutoring in virtual learning environments, as well as identification and subscription to national or international academic networks among others. The trends are set from institutional initiatives on continuing education for teachers and the general public, through which identified needs, strengths and areas to be implemented in teacher training for the appropriation of ICT.
The process takes place in remote or virtual mode in 5 higher education institutions where they identify similarities in the strategies implemented, the design of virtual environments, tutorial support, and phases of the training process.

Methods and Teaching Aids - The didactic exploration of a toy
Article content. Press on the above link to close

The didactic exploration of a toy

This communication describes an investigative teaching strategy based on the exploration of a toy (a little plane). This is hung from the ceiling by means of a suction cup and has a switch that, in the “on” position, causes the rotation of a propeller, linked to a battery.

With the propeller turning and the plane away from its equilibrium position, when subjected to an appropriate short pulse, it soon starts to rotate horizontally.

The practically stationary motion reached by the aircraft can be considered circular and uniform because it achieves a situation in which the gravitational force, the pulling force caused by the propeller, the force of air resistance and the tension of the rope have a centripetal resultant.

With this little plane moving round it was possible to run a theoretical-experimental lesson with 1st year University students having two major objectives:

1th – A theoretical goal which is to review and deepen the knowledge about some concepts and laws of physics, such as: rigid body, particle, speed, velocity, acceleration, vector, components of a vector, tangential and radial acceleration, applied forces and link forces, components of a force, tension of a rope, gravitational force, pulling force, air drag, inertial force, equilibrium of forces, Newton’s laws of motion, conical pendulum, description of motions in inertial frames and accelerated frames.

2nd - A practical goal that is to get students to learn how to make the gathering and processing of experimental data and the statistical analysis of errors. They had the opportunity to learn and apply important concepts such as error, measurement uncertainty, normal or Gaussian distribution, arithmetic mean, moments about the mean, skewness and kurtosis, experimental standard deviation, expanded measurement uncertainty, confidence intervals, significant figure and the expression of measurement results.

In this communication it will be made also some brief remarks about the didactic approach and the classroom environment in order to provide a meaningful assimilation of knowledge and that it would please the students, as at the end was manifested by them in a written critical analysis that each of them produced.